The Ruby Creek Valley near Atlin, BC, north of Surprise Lake, is stunning with rocky peaks, wide open valleys, and views over Atlin Lake from high up. A long history of mineral exploration is evident across the area, with roads criss-crossing up many mountains and nearly every valley. While the scars across the land are an eye sore for sure, they do provide great access for hiking and biking and getting to some unspoiled areas. There is still a wilderness feel, and wildlife still abounds in the area, as we've seen curious caribou, large herds of mountain sheep, marmots and pika, as well as alpine porcupines! 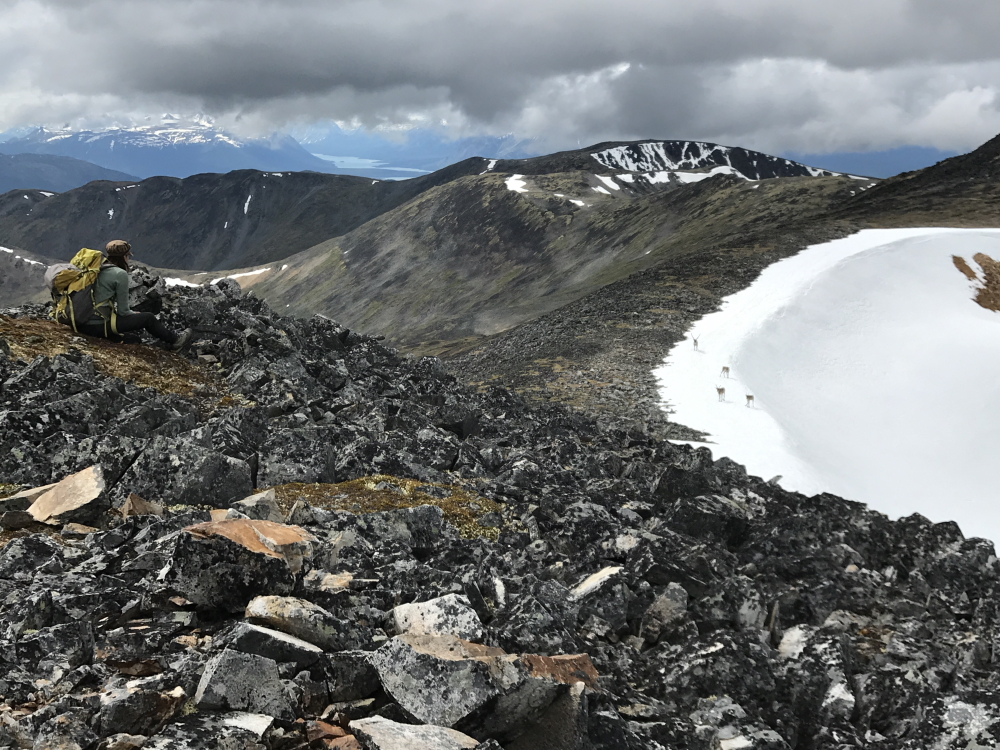 There are endless opportunities for exploring, connecting different valleys and ridges with longer loops and multi-day hikes. We've only posted the Ruby Mountain hike to date on the website, but below are just a few other examples of what you can see and do in the area.

DISCLAIMER: There continues to be active mineral exploration in the area over the past few years, so be sure to adhere to any area closures and signage and stay clear of any crews working in the area. As far as our research could tell, the main activity has centred around the flanks of Mount Leonard and within the upper Ruby Creek drainage.

GETTING THERE Atlin lies 175 km drive from Whitehorse. To get to the Ruby Creek Valley, take Surprise Lake Road from the T -intersection at the entrance to Atlin. Drive this road for 20 km until you reach Surprise Lake. Once near the outlet of the lake, continue following the main road that winds left and cross the bridge over Pine Creek and the lake outlet. Keep right after the bridge, staying on the main road and follow this for another 6.5 km. You will pass a BC Recreation Site with a small campsite early on as well as Boulder Creek. After that 6.5 km, the road heads left up the Ruby Creek drainage. Follow this road for another 5.9 km until you reach a gate.

Up to this point the road is quite well maintained and driveable in all vehicles. If the gate is open/unlocked you can continue further up the Ruby Creek drainage another 2.5 km into the upper Ruby Creek Valley on the left. Note, the road is rougher with larger rocks after the gate but still manageable in most vehicles. Watch for rockfall along this section as the slopes above the road could be unstable, so no stopping until you reach a safe spot to park! There are safe places to park and turn around where the valley levels out and the main road basically ends at an intersection of smaller, rougher roads. This is a great spot to pick your adventure.

MOUNT LEONARD 2017 Our first visit to the area was in 2017. Since we were carrying around our then 15-month-old son, we were stoked to find any hike with great access to the alpine. I'm sure other outdoorsy parents of young children can relate to wanting to find the best bang for their buck, when it comes to finding good hikes to do with kids. Our guy wasn't walking yet, so we had to carry him around, and knew that 3 hours in a child carrier was his limit. (Side Note - He has since learned to walk, and last year hiked to the top of Ruby Mountain (2021) at 5 years old).

On this particular trip in July 2017, we camped a couple nights at the Surprise Lake Recreation site with some friends. 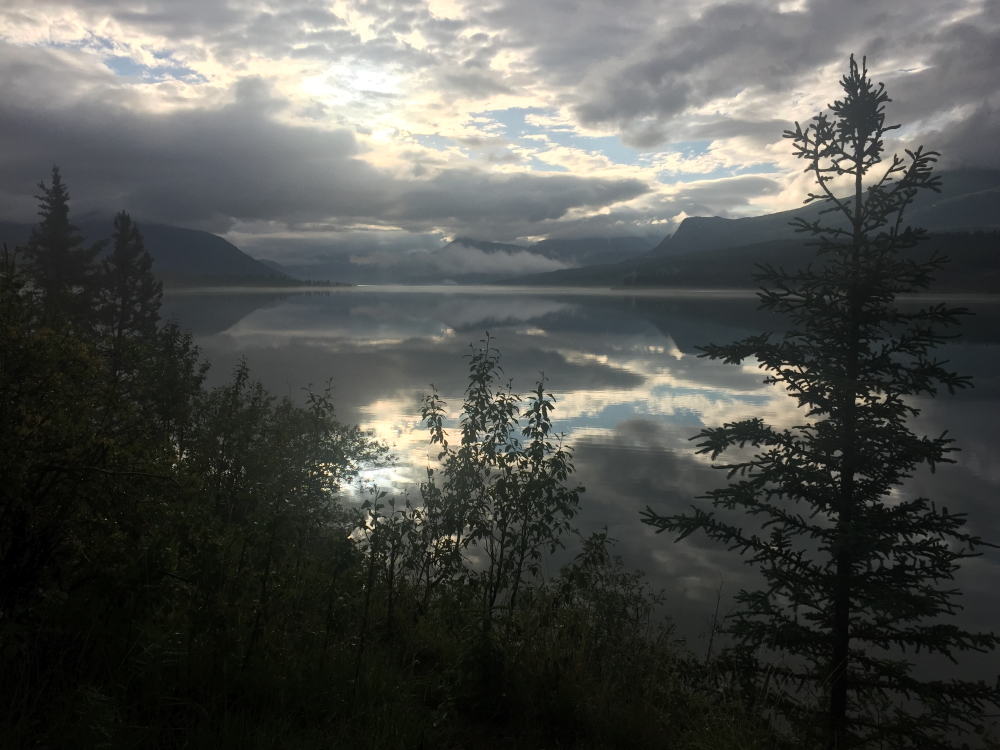 Waking up to a moody morning at Surprise Lake.

One moody morning, after it had rained all night, we drove up the road to the Ruby Creek area to see how far we could get. We made it past the gate (which was open), and parked in a nice open area where a bunch of spur roads left from. I had eyed up Mount Leonard on the topo maps as a good objective, and while it looked big in person, we decided to try it anyway. 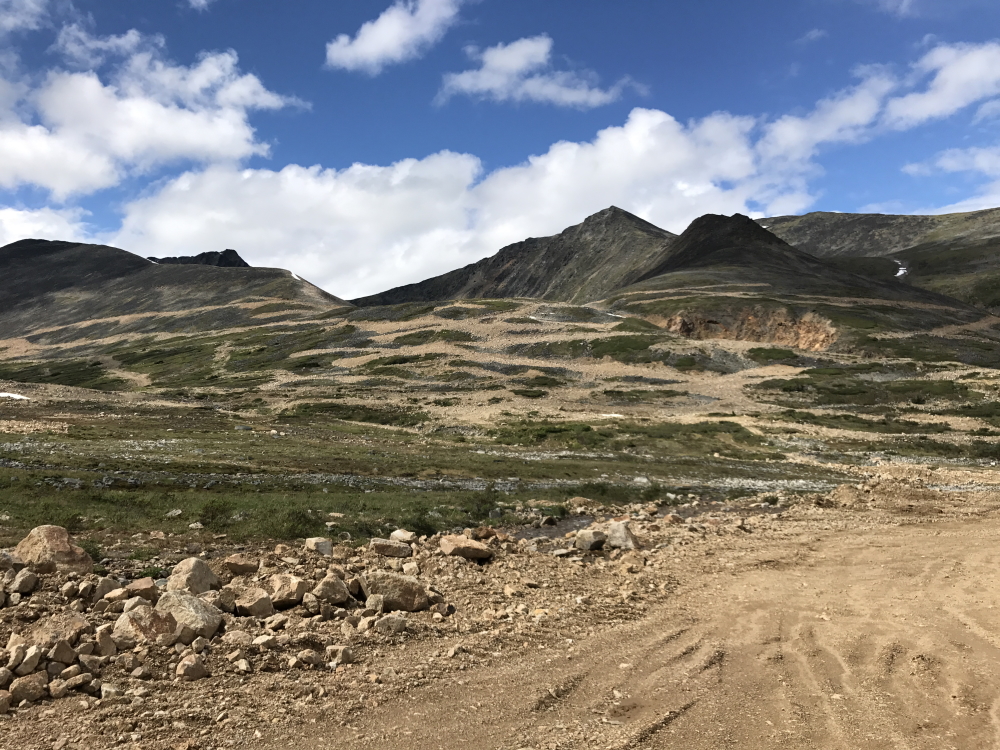 The view of the mining activity on the lower flanks of Mount Leonard from our parking area.

We followed one of the roads that went north. Eventually there was a fork to the right which switch backed up the mountainside. This took us to small lake. We continued up the road from the lake, and eventually ditched the road to gain the actual ridge that lead to the summit. It was pretty rocky talus with lichen and moss patches, but not too steep with carrying our little one along. The views were amazing, even though the many mining roads scarred the landscape. 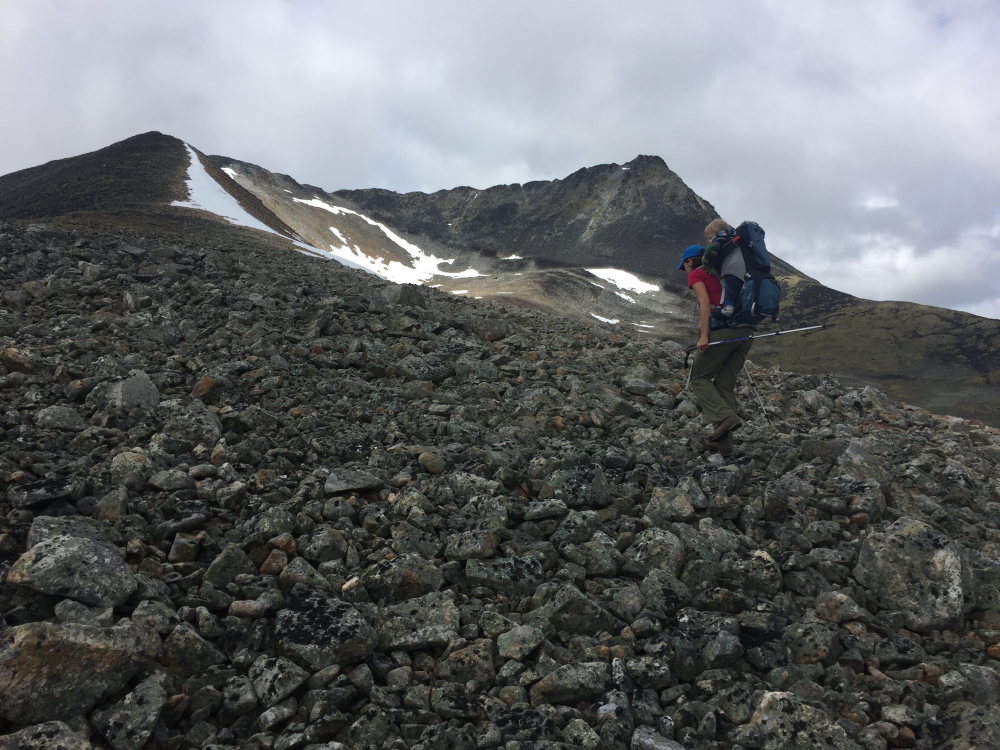 Carefully hiking up the talus slope of Mount Leonard, from the little lake. 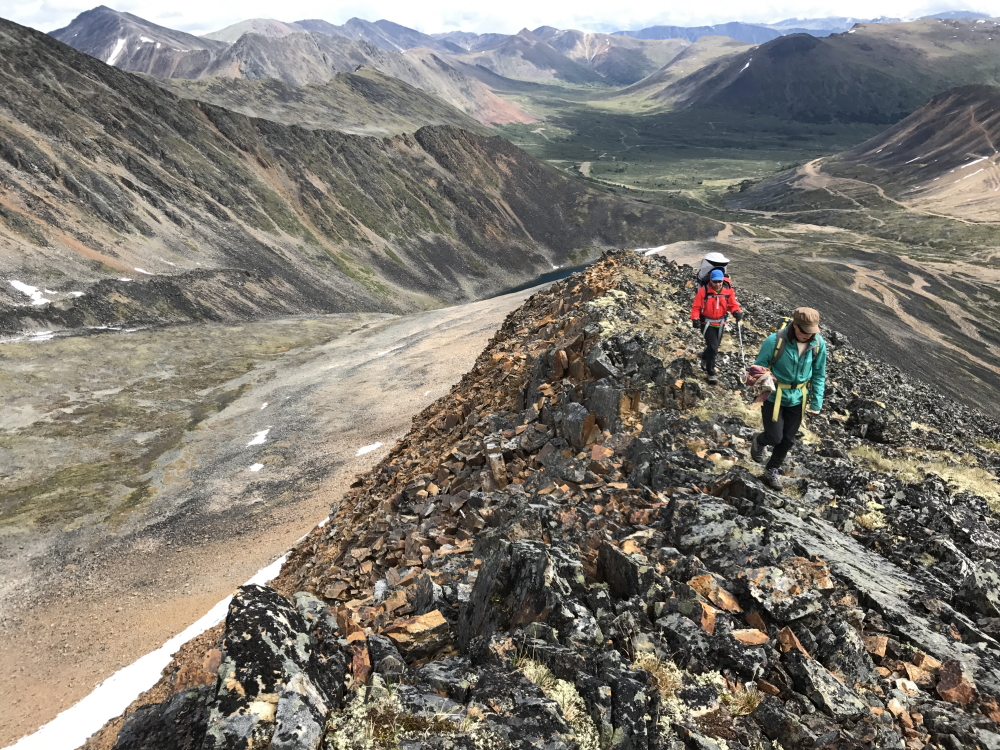 Views looking back down the valley to the northeast.

After a while though, Marko decided to turn back with our son (who was now asleep in his carrier) as the rest of us continued up to the peak. We reached a viewpoint before the final push to the summit, where we saw 4 curious caribou on a snow patch. We stopped to watch them, as they watched us and came closer and closer. 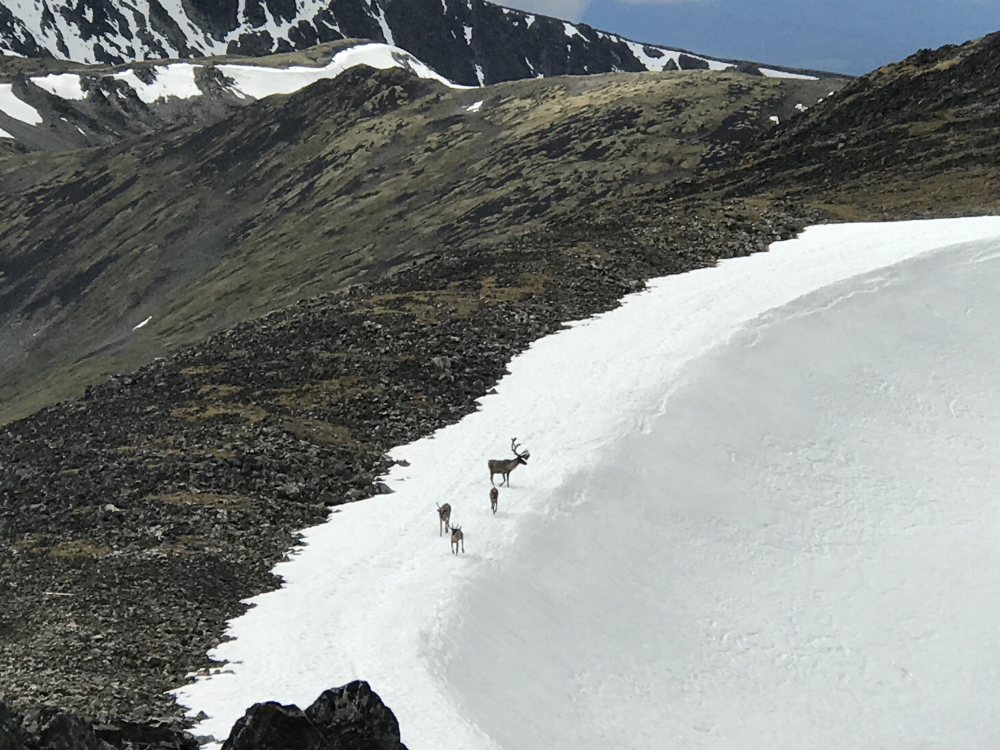 Curious caribou near the summit.

Eventually they got bored of us and left, and we could make our way to the final summit with a cairn on top. There was another little lake below us, on the north side of the ridge and ridges that went on and on to other vistas. That was enough exploration for time, as the clouds lifted we got a bit of a view of Atlin Lake far below. It certainly left me wanting to come back and spend more time in the area. Once we got back to the truck, the sun came out in full force. That's how it goes, I guess. 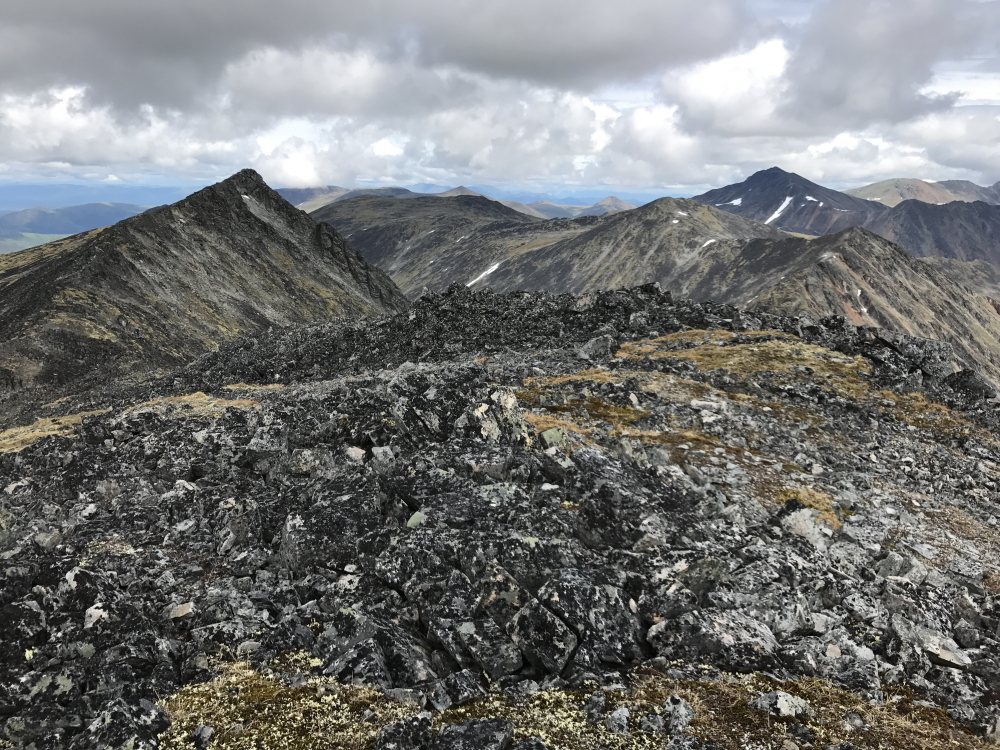 Ridges going on and on, leaving more to explore.

In the summer of 2020, when a trip with friends was cancelled to the Cottonwood Trail (in Kluane, due to heavy rains and high-water levels) we had to change gears and find another hike. I had wanted to go back to the Ruby Creek - Mount Leonard area and thought we could finagle a little 3-day backpacking trip in there. I checked out a few zones on the maps with connecting ridges and little alpine lakes, and everyone was on board for 'go with the flow' kind of trip. 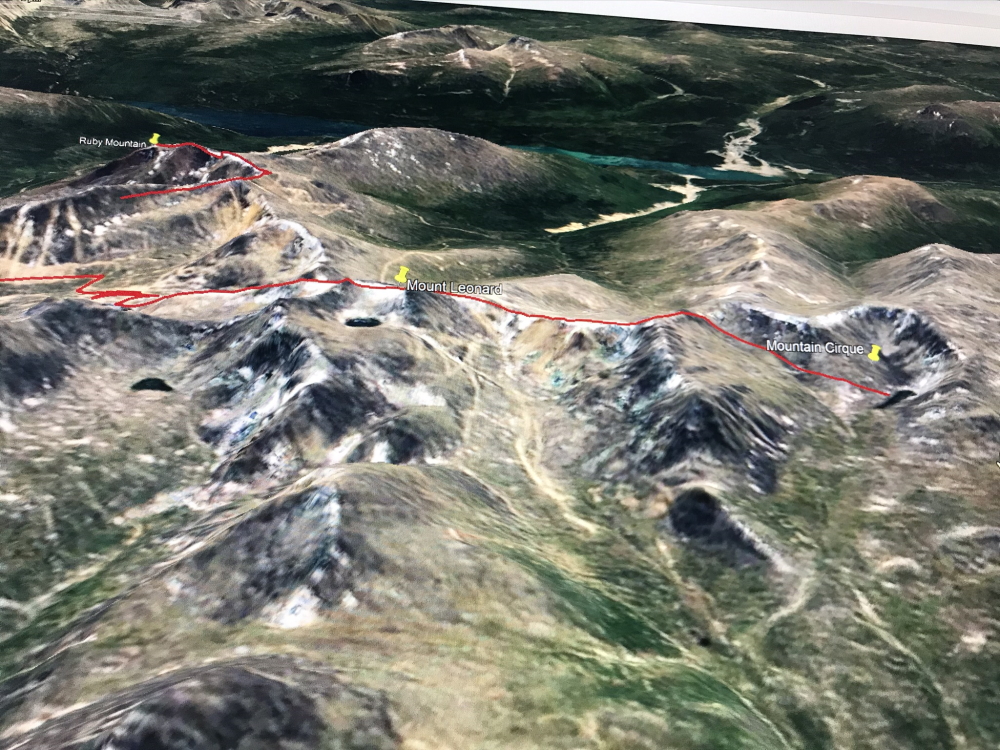 We made it to the same parking area in the Ruby Creek Drainage as in 2017 and started out hiking along the road to the west to a saddle between Ruby Mountain and Mount Leonard. We then followed a rougher road that headed up the back side of Mount Leonard and then traversed along some talus slopes to gain the ridges to the west.

It was a lot of side hilling along talus for a while, so not the most fun. At one point, with my head down, concentrating on not slipping on the rocks, I saw something move out of the corner of my eye. I let out a scream as I leapt back. To my surprise it wasn''t a wolverine, bear cub or marmot, but a porcupine! It lumbered over the talus to get away from me, as my heart rate finally slowed back down. 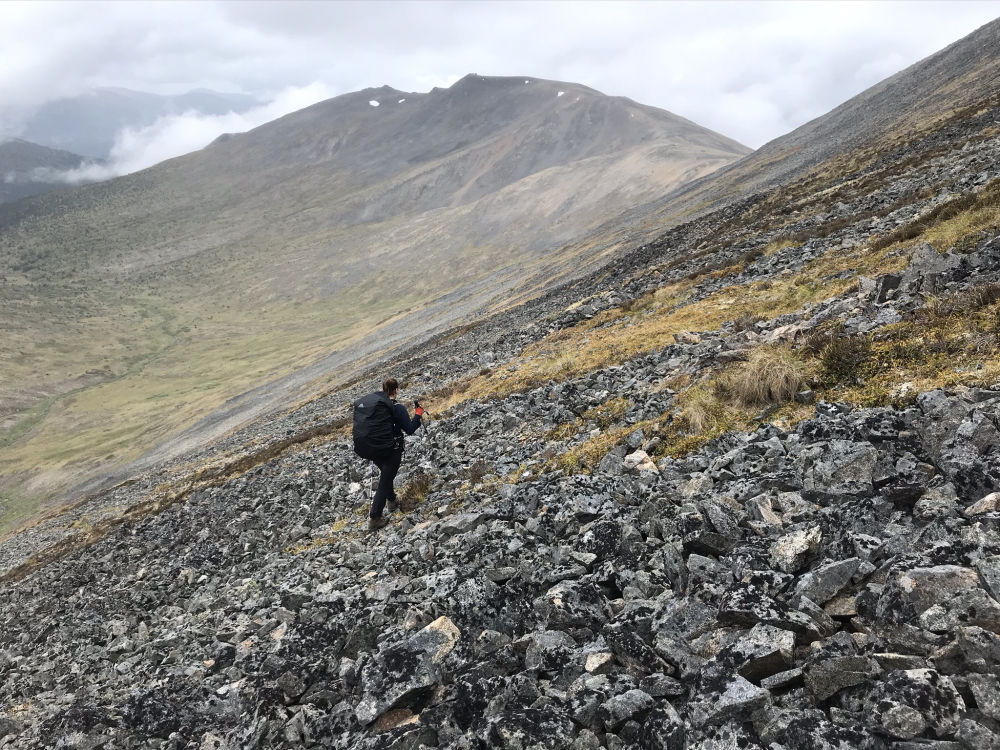 Who would expect to see a porcupine up here amongst the talus.

After about 8 km, we made it to the ridge overlooking one of the alpine lakes where I thought we could camp. As we looked down at the little lake, and the 100m of talus slope we'd have to descend, we decided instead to stay up high on the ridge to camp. 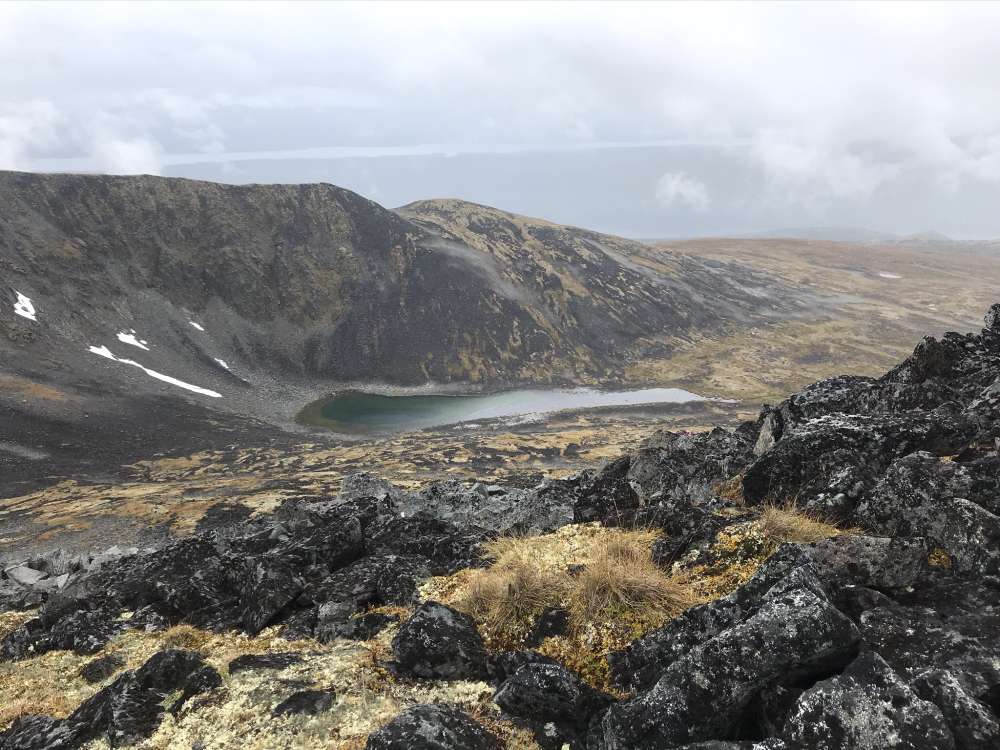 The little mountain cirque lake below, which was our original destination. 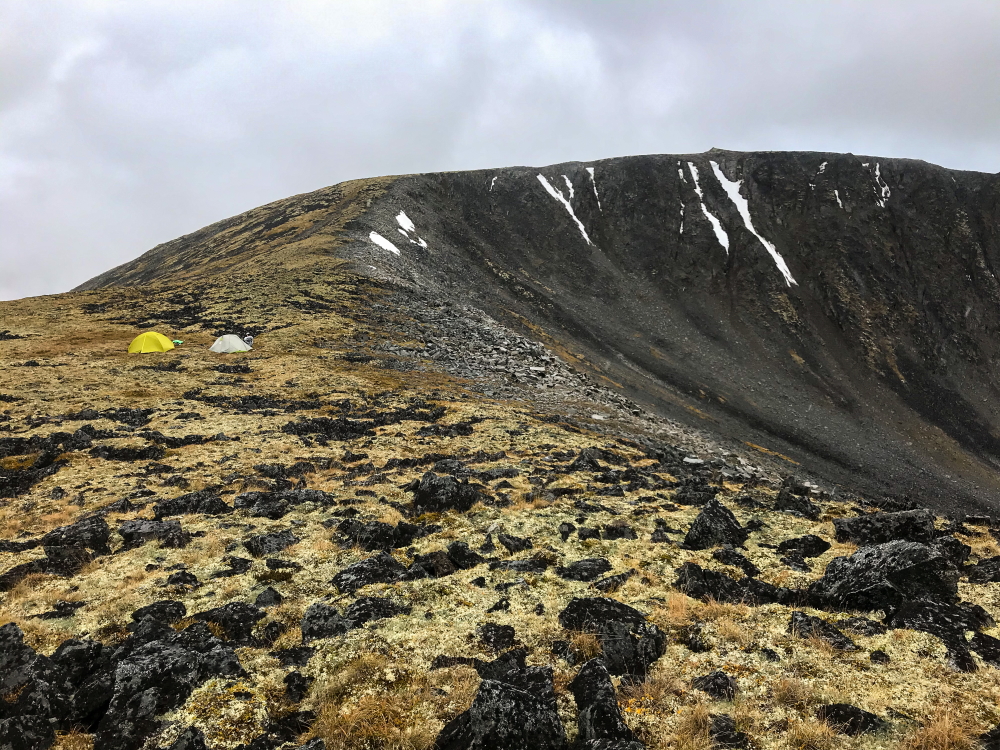 We opted to camp high on the ridge instead of descending to the lake.

Unfortunately, we were socked in with rain so couldn't get much of a view. But the hope was that by the next morning we'd wake up to an awesome view from our ridge camp. Thankfully, we had enough water to cook our meals (as there was no water source on the ridge aside from some snow on the north side). We finished our food just in time as it started to rain harder, so we retired to our tents to sip bourbon and got to bed early.

Sadly the next morning was still very foggy and a bit rainy. Our plan was still to pack up and find another camping spot back towards the vehicle. We hiked out a different way and came across a large herd of sheep in a beautiful little alpine valley. They kept their eyes on us as we carefully navigated around them so as not to disturb them.

We found a nice camp closer to Mount Leonard with views down towards Mount Barnham to the northeast. That evening we heard other trucks and ATVs in the area. The next day we ran into a geologist working in the area. Work is definitely still ongoing. The Ruby Creek area, has a well-known Molybdenum deposit, that prior to the 2008 financial crisis, was nearly through permitting and funding. The area also has some promise for gold and silver deposits. Thankfully, we were still able to hike in the area during our trip, as there was not much activity.

The next morning we hiked up a slope of the Cracker Creek Cone to maybe hike the ridge to Ruby Mountain. Fog moved in and out as we hiked the rocky ridge towards Ruby. There was a lone sheep as well as several marmots along the ridge. We were still socked in with some fog, so decided to save the summit for another trip when it would be clear. Seems everytime we visit the Ruby Creek Area, we find more to explore. Maybe this is analogous to the geologists and geotechs working in the area. While they 'mine' for significant mineral deposits, we 'mine' for hiking adventures. 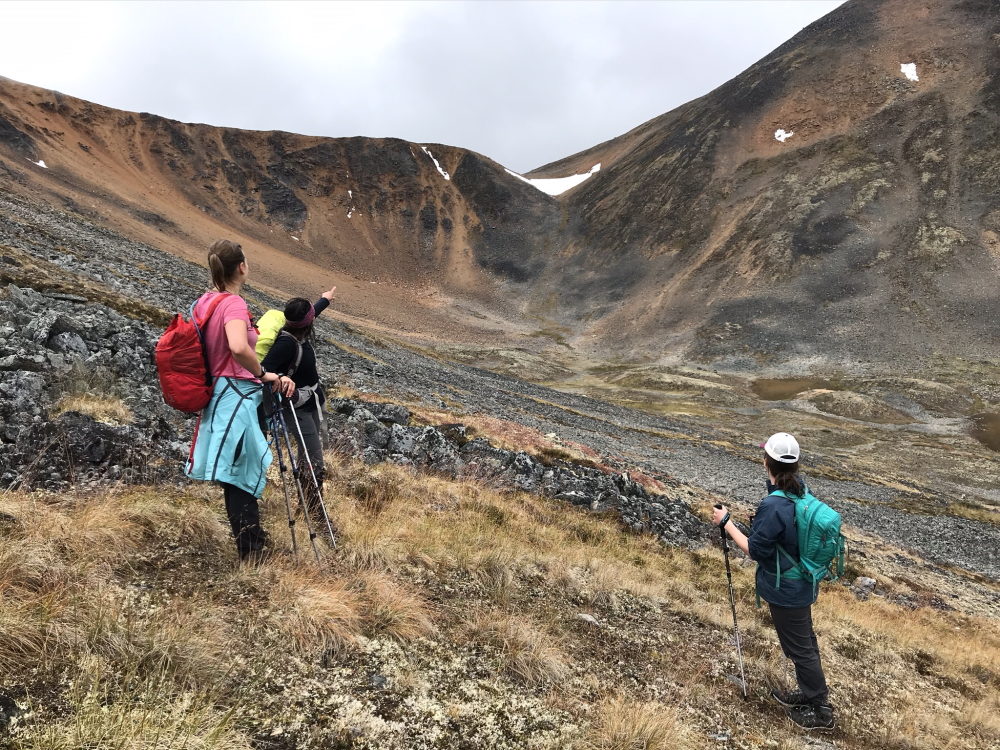 Day hiking up around the Cracker Creek Cone. 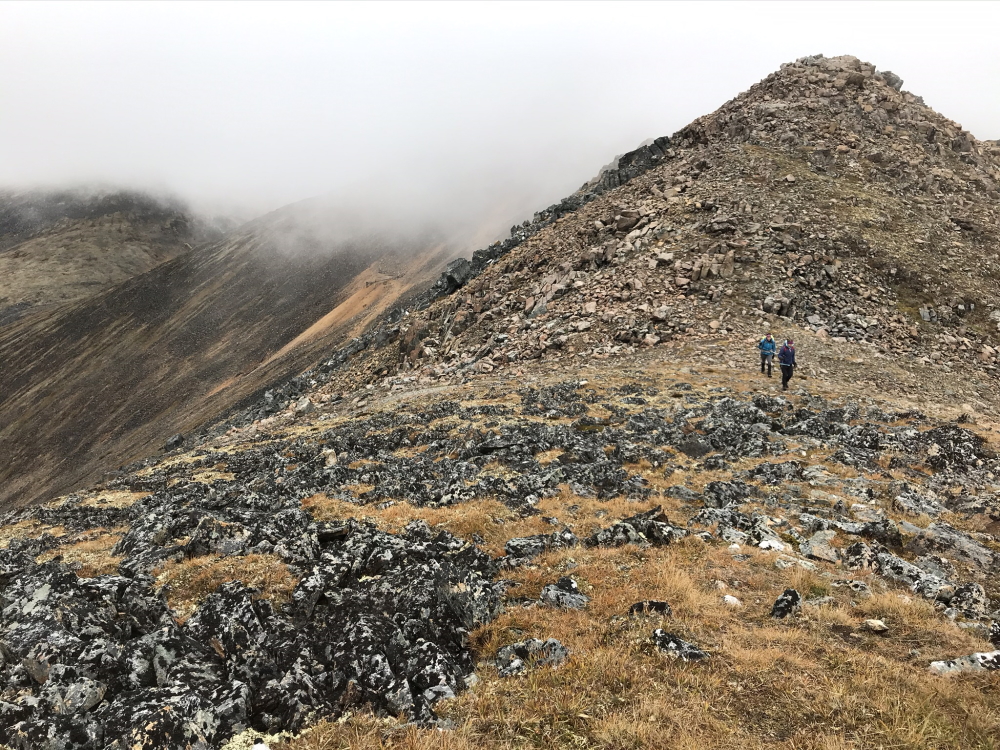 Dodging marmots and fog along the ridge near Ruby Mountian.