Mount Granger is a prominent mountain near the southern end of Fish Lake. It has been on our radar for years but is quite a mission as a day trip. Looking at the maps, we calculated that it would be a 40 km return trip with nearly 1,700 m elevation gain via a series of backroads, ATV trails and bushwacking.

In the summer of 2022, we took the plunge and decided to give it a try as an epic day trip with the help of our e-bikes. We asked our friend Darren to join us, who is always keen on a good mission in the mountains.

Our plan was to bike about 16 km via the backroads, to a point where we could hike up a rougher ATV trail to the southern face of Mount Granger. From the satellite imagery, it looked like there would be a short section of bushwacking to reach the alpine.

A map of our route.
We braved the bugs at the end of July (which were horrible by the way) and biked up the Coal Lake Road to the plateau below Golden Horn. From there, we took the road west (right) from the junction. We kept left at any forks as the road climbed up to a pass, south of Mount MacIntyre. 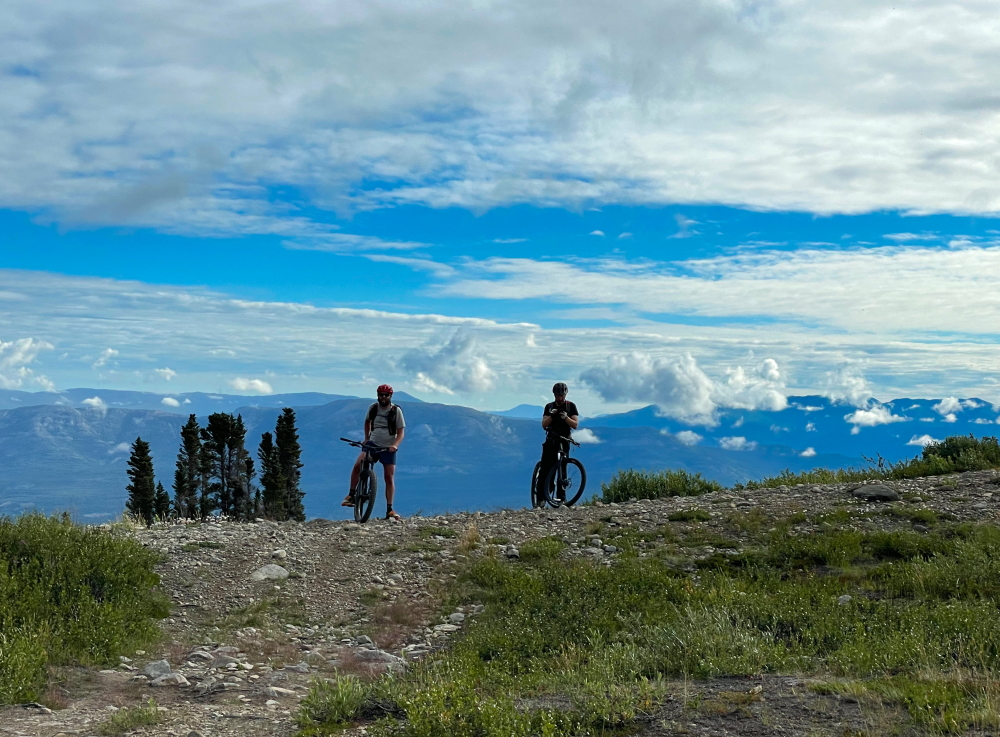 Making it up the Coal Lake Road to the plateau below Golden Horn.

These backroads are by no means an easy 'bike in the park'. They are in bad shape, with many loose rocks and boulders, making for some technical biking, up and down! In many instances we had to walk the bikes up or down some sections. 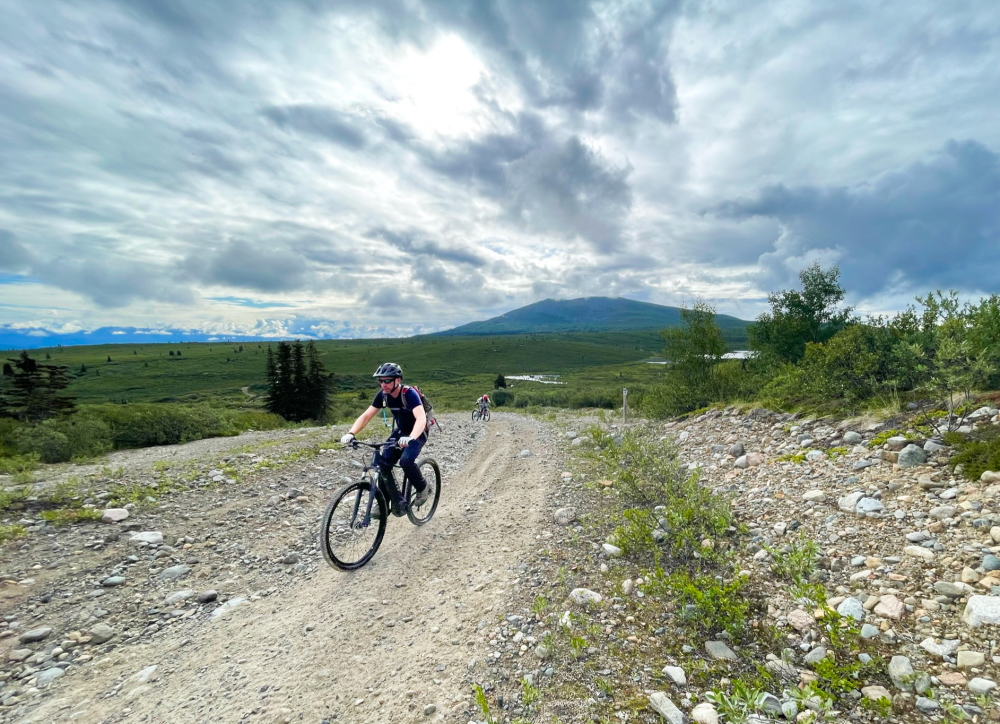 Starting the climb up to the pass south of Mount MacIntyre.

There was also more ascent and descent to reach the hike than expected. So after climbing up the pass, we were dismayed to find that the road now dropped down several hundred meters to the next valley. We crossed a small tributary of Wolf Creek and then found the ATV trail that would lead us west to Mount Granger. Needless to say, we made it to the start of the hike, just a little more tired than expected.

We dropped the bikes in the bush and switched gears into hiking mode. The ATV trail offered easy access through the subalpine shrubs, but petered out after about 500 m. The bushwacking was relatively easy though as we continued directly west to get closer to the more gradual-looking north face of the mountain. The bugs were horrendous. It was hard to take a picture without 20 photo-bombing mosquitos in it. 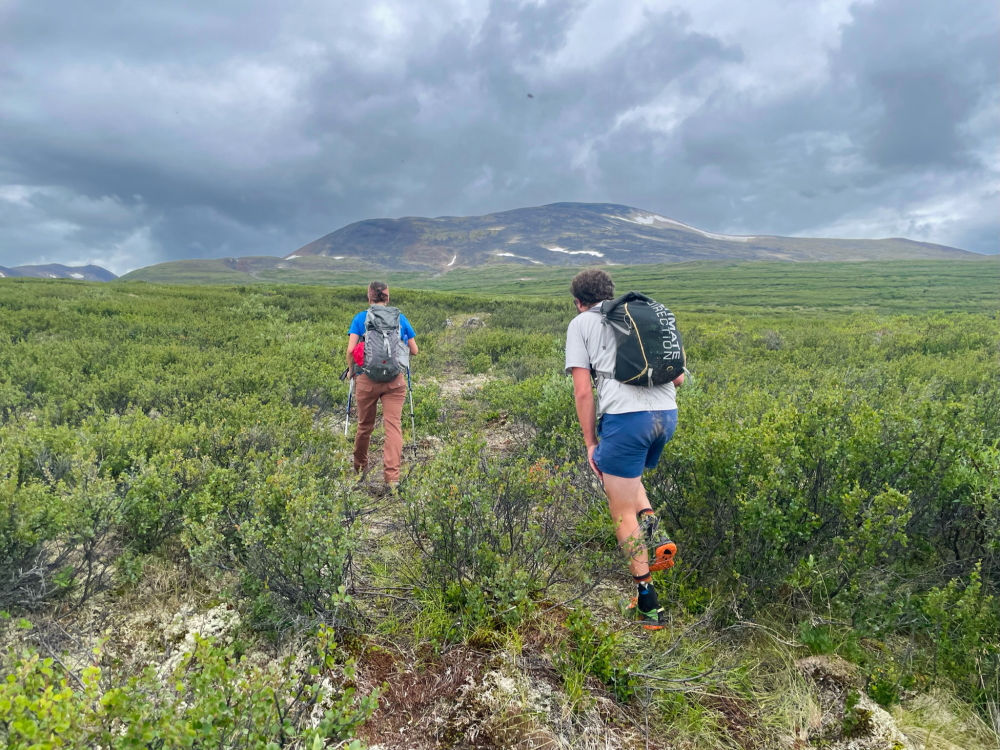 Starting the 'hike' up the ATV trail. 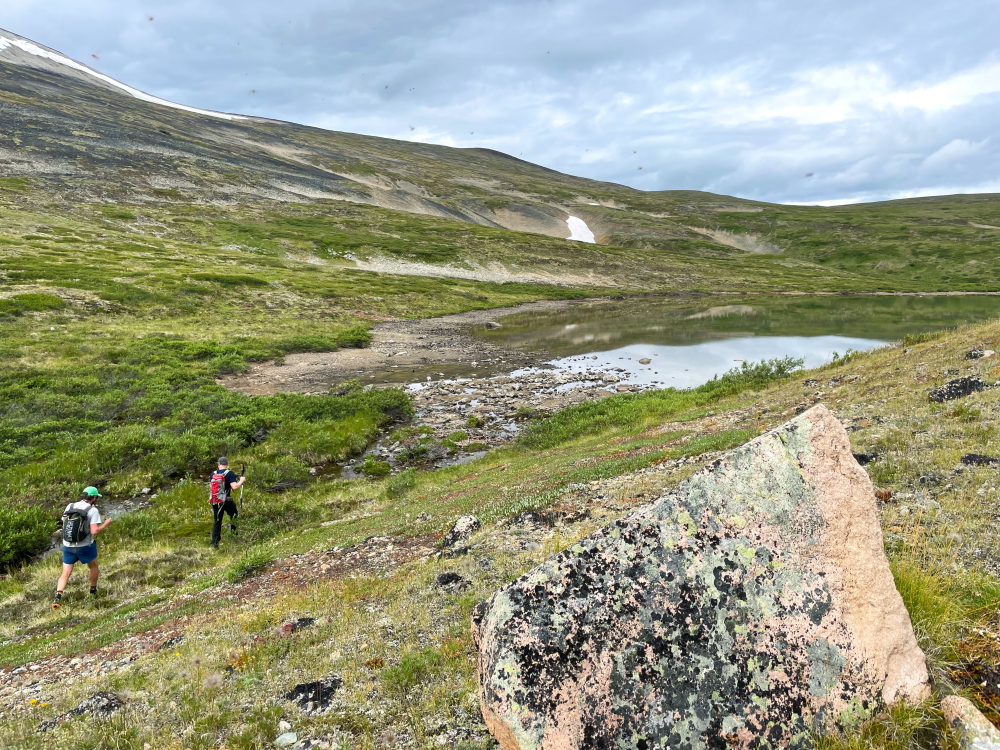 Reaching the alpine below the north face of the mountain. Mosquitos take centre stage in the skies.
Once we were into the alpine and in line with a good access point up the mountain we headed south, up the talus strewn north face. We soon noticed some animals up on the extensive snow patch up above. It turned out to be a group of caribou - cows, calves and bulls. These snow patches are well-known summer refuges for wildlife to escape the bugs and cool off on hot summer days. We adjusted our approach to avoid disturbing them, but they still managed to sense us and moved on. 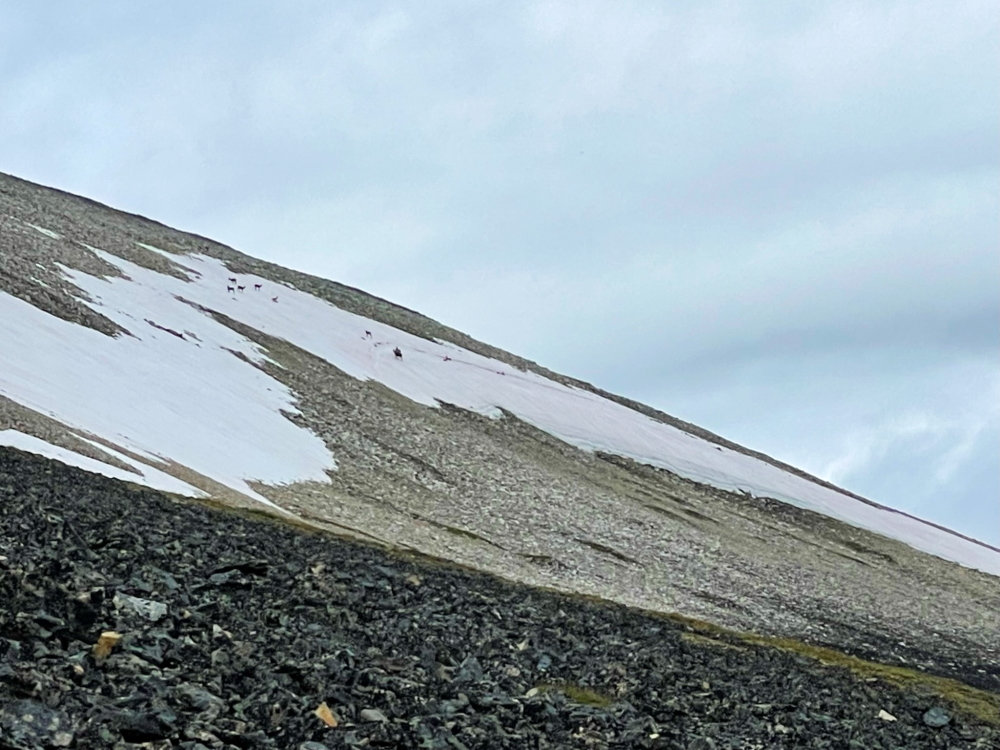 Caribou on the snow patch on the north face of Mount Granger.
As we were avoiding the caribou, and getting closer to the rounded summit, we discovered a large group of Dall's sheep on the next rise. Apparently, this mountain is quite the wildlife hub! Throw in a pika we later heard on the way down, and you've got some iconic alpine species. 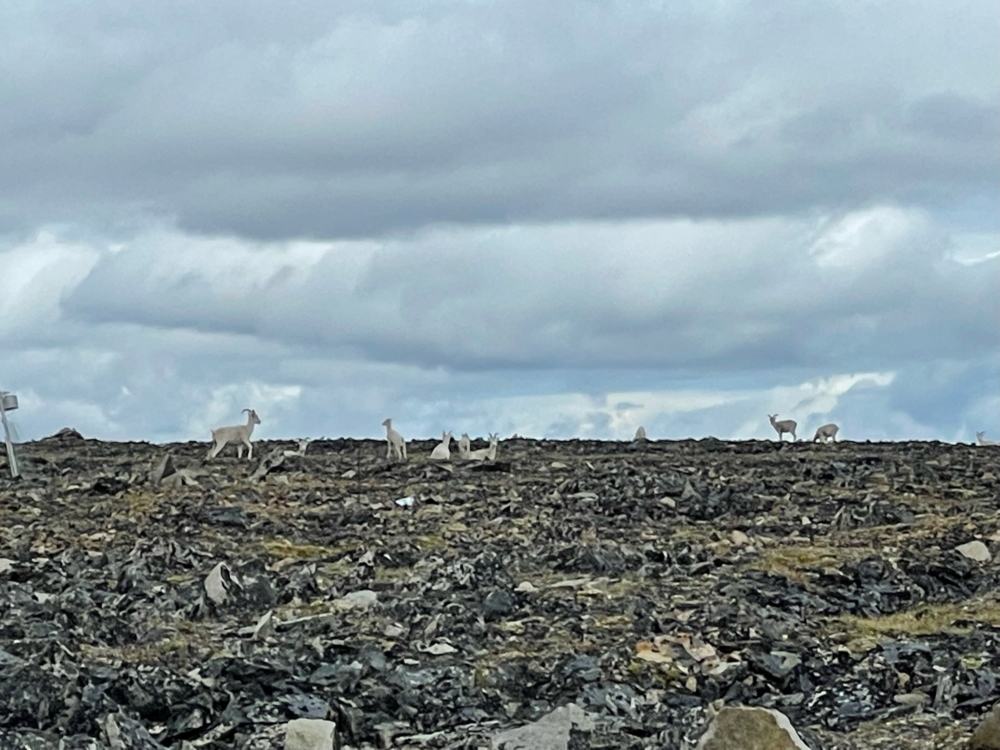 Dall's sheep near the summit.


We adjusted our course again more to the east shoulder of the mountain. At this point, I decided to save my energy for the descent and epic bike ride home and let the guys go ahead to the summit, if they could avoid the sheep.

I found a beauty lunch spot looking south into the next little mountain valley. Meanwhile, the guys had reached the rounded summit cairn, with a beautiful view looking north over the extent of Fish Lake. The water looked like glass, with not a breath of wind, something you don't see very often on Fish Lake. 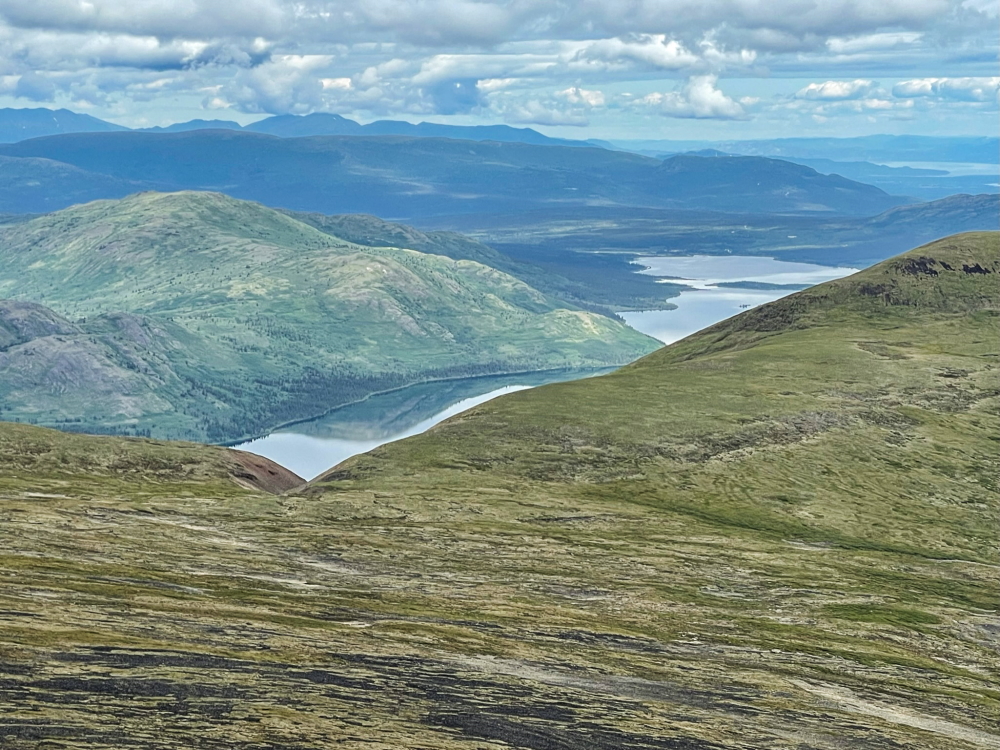 A rare sight to be had, calm waters on Fish Lake.

Enjoying our lunch spot looking south into the next valley.
To avoid disturbing more wildlife on the way back, we went down a slightly different way, more to the east. It didn't take long to pick up the road again where we switched over to bike mode. 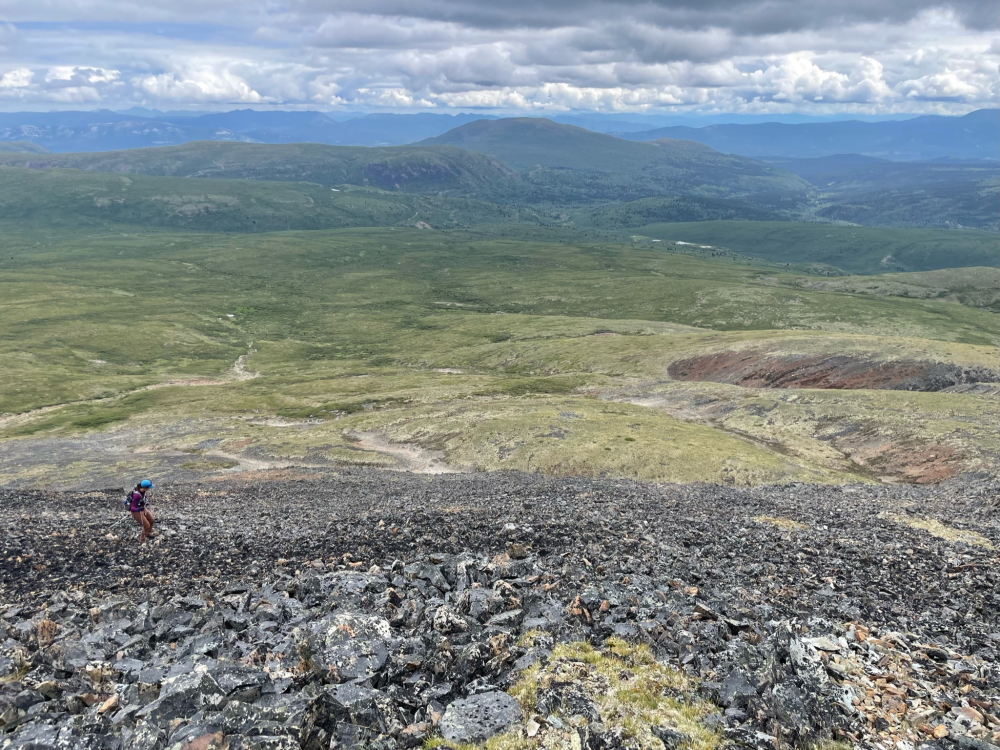 Heading down the mountain to get back to the bikes.


Then all we had left was to make the arduous ride back up to that pass before making our way over to the plateau below Golden Horn. Before we knew it, we were white knuckling down the Coal Lake Road, and back to our vehicles.

It was certainly a mission, even with the help of the e-bikes. Would we recommend this trip? Not really, unless you have had your eye on Mount Granger, like we had. The hiking itself is not super exciting, the views are good but not specatacular, and it is a lot of travel on these terrible back roads.